CIO Robert Horrocks, PhD, says in order to reconcile assumptions on inflation with what might actually transpire, investors need to look through a wider lens and be prepared for a future that may not look too different from the past.

Less is so often more. Take a simple metric, like the breakeven inflation rate. One glance and we can see that the market expects prices to be rising at a rate of 2% in five years’ time—in line with the Fed’s mandate. That’s a useful and somewhat sobering indicator to keep in mind amid the frenzied attention given to where inflation will be in the coming months and by how much the Fed will need to hike rates to manage it.

The breakeven rate—calculated by subtracting the yield of an inflation-protected bond from the yield of a nominal bond—helps markets gauge where inflation will be in the next five years. While it’s based on market expectations it would be unwise to disregard it. In fact, we would argue this kind of metric is much more useful to long-term investors than day-to-day speculation on data points. Will the U.S. inflation rate fall or uptick from last month’s reading—and what will this mean? Will the Fed raise rates by 75 basis points (0.75%) or 50 basis points at its next meeting?

Expending energy on short-term analysis won’t yield insight into the kind of macro landscape we can expect emerging markets companies to be operating in over three, five or 10 years. It does serve to illustrate, however, what we regard to be reality gaps permeating popular economic commentary and analysis at the moment.

Take the aforementioned inflation-reality gap. The level of scrutiny given to near-term movements in prices is entrenching assumptions that prices will keep rising or at least stay high. But that won’t necessarily be the case. Elevated prices are in place partly because of significant non-economic triggers: supply bottle necks resulting from the pandemic, fiscal stimulus enacted to induce recovery from the pandemic, and high commodity prices caused by the war in Ukraine. As some of these forces start to unwind, inflationary momentum will weaken.

The inflation we see today is also a western phenomenon. China, for example, doesn’t have an inflation problem, in fact it has room for stimulus. And as China’s economy recovers and expands, we expect that to further weaken western inflation. China, of course, is not without its problems but the fundamentals of the economy are sound. 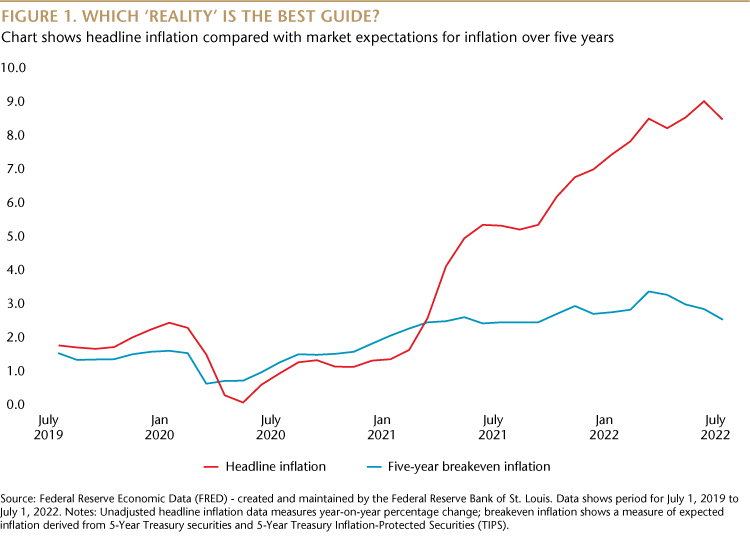 The other big reality gap we see is with the U.S. dollar. We would argue that the greenback is unjustifiably strong. Its value has risen as investors have sought safe havens in U.S. treasury bonds. But like with inflation, we don’t see a higher-value dollar as a structural change. If you accept that the conditions are in place for inflation to fall fairly aggressively over the next few years then you would also as a consequence expect to see interest rates plateau and fall and the dollar decline.

What is the significance of these reality gaps for emerging markets? We increasingly believe that the global economic trajectory will not take us to a new and extreme place like stagflation but rather to a familiar one—one of low inflation, low rates and low growth, much like the pre-pandemic world. So we should look to the past to prepare for the future. It could mean a renewal in the search for long-term, quality growth. Specifically, we see conditions taking hold that could begin to reverse the aggressive shift to value investing we saw in the past year or so. In emerging markets, particularly Asia, we’re seeing a resetting of the fundamentals. The gap between equity prices and earnings is narrowing while you could argue that price-to-book levels are at crisis levels. There is huge potential value to be had.

We also think the path of the world economy over the next few years will support fundamental growth investing rather than the excessive exuberance for stocks without profits that was apparent leading up to and into the pandemic. It will be challenging times—we think a recession in the U.S. and Europe is a probability rather than a possibility—and only companies with real comparative advantage, not to mention solid earnings, will be in positions to deliver decent growth.

The reality for emerging markets will be those companies that do well will be those that manage post-pandemic frictions well, have good market positions and can demonstrate growth. The volatile environment of the past two years, where growth outperformed so dramatically and then crashed, is probably an anomaly—or at least something that might only be repeated occasionally and unpredictably in the future. There’s nothing that we see to suggest the world will not go back to an environment where ultimately strong, quality businesses will outperform over the long run.

Definitions:
Five-year breakeven inflation rate: Calculated by subtracting the yield of an inflation-protected bond, such as Treasury Inflation-Protected Securities (TIPS), from the yield of a nominal bond, such as Treasury securities, during the same time period. This number represents what inflation would have to be in order for investors to “break even” (or earn the same) when buying one bond type over the other. This calculated rate is not guaranteed, but it helps investors get an idea of what inflation may do in the years to come.