Inflation or Reflation? That’s the Question

CIO Robert Horrocks, PhD, says the impact of inflation on emerging markets depends on the persistency of price rises and the Fed’s response.

If the inflation we’re all currently experiencing is really reflation, in other words, a bounce back in economic activity that also raises some prices, then it’s probably not too much of an exaggeration to say that this is unambiguously good for emerging markets. We could then expect to see small caps outperforming large caps and cyclical businesses, like energy, raw materials, banks and industrials, outperforming secular growth companies, like consumer stocks. More generally, reflation often enables value stocks to outperform growth stocks which we can caricature as low price-to-earnings ratio (PER) companies beating high PER companies.

If, however, the price rises we’re seeing are unrelated to economic recovery and are simply a rise in average prices, that is more worrying for markets. True inflation should concern central banks to the extent that it is excessive and/or persistent and may therefore elicit a response, such as raising interest rates and potentially strengthening the dollar and squeezing liquidity. Current average price rises are certainly excessive in much of the world; core inflation is well above the Federal Reserve’s 2% target and even Europe has seen rapid price rises.

So the key question is: are these price increases permanent or transitory? There’s still much evidence to suggest a large part is indeed transitory and due to supply chain bottlenecks. If that is the case, the cure for these rising prices are the rising prices themselves as they will signal firms to increase production. This remains the view of the bond markets. However, as we have seen, markets are trying to factor in a Fed reaction. And that’s the core of the problem.

To boil it down, there are four possible scenarios for how inflation plays out and how the Fed reacts in 2022. We may have persistent inflation and a loose Fed, which stokes up trouble and more tightening later on. Or we have persistent inflation and a tight Fed, which squeezes the markets. Even worse than this would be transitory inflation and a hawkish Fed, which would be an overtightening. Only transitory inflation which is correctly diagnosed by a dovish Fed is supportive of markets. What an impossible job. Add to this that the U.S. economy may be much less sensitive to rate rises than in the past, so that even with heightened expectations of rate rises, investors may still be underestimating the scale of hikes needed if inflation truly turns out to be more persistent than temporary. 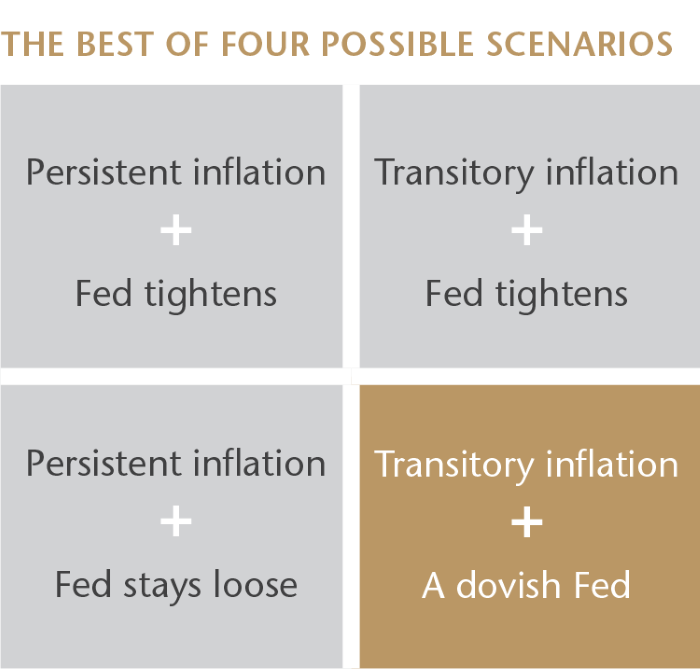 What has been noticeable about the current inflationary period is the performance of gold versus other commodities. Oil and copper have recently risen strongly whereas gold is much more subdued. Oil and copper are commodities with a much stronger link to economic growth and production; gold is really a hedge against real interest rates—it typically does best when inflation rises faster than bond yields. So this also suggests to me that there is more reflation in this surge in prices than there is true persistent inflation. I’m hopeful that the Fed doesn’t need to be too aggressive. I’ll be keeping my eyes on quarter-on-quarter changes in inflation rates in the hope that they will show a tendency for the core Consumer Price Index (CPI) to decline.

There is also a silver lining: low Asia inflation. Core inflation rates may have increased dramatically in the U.S., Europe and Latin America but in much of Asia they have barely budged. It’s true that South Korea has raised interest rates, as much to cool the property market as anything. However, China is in a loosening cycle, Japan needs more inflation, and even India, for whom inflation has been an unwelcome speed limit for the economy in years past, has given itself a bit more room to grow by holding inflation down. So, Asia is far less vulnerable to tightening than has historically been the case and may even be running monetary policy at odds to the U.S.

Overall, the effects of rising prices on emerging markets depend crucially on how much of the rises are persistent and how the Fed and other central banks respond. These are hard things to know. While there may be investment opportunities within commodity producers the best way of dealing with these rather opaque cycles in a portfolio context is to look through the macroeconomic issues and focus on those companies that are strong enough to navigate the environment. It is how we have always approached investment in emerging markets.